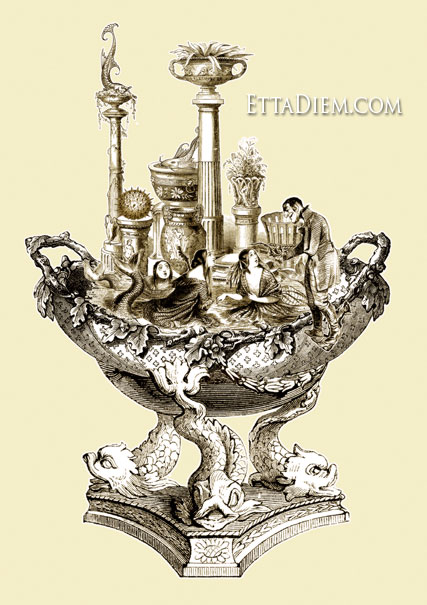 Seaweed Starwart found herself spending more and more time lounging in the fallen leaves she was supposed to be raking up and staring at the fence surrounding the house across the street. Every so often a man would come walking down the sidewalk and as he grew nearer to the fence his eyes would become dreamy, his movements would become relaxed and ever so slowly he would let himself drift towards the fence. Once there he’d happily stand looking over the fence at something Seaweed couldn’t see until the lady of the house came rushing from the front door and shooed the man away.

Lazily Seaweed got up from her comfortable leaf nest and found that her curiosity was getting the better of her. She checked to make sure no one was watching and she slipped over to the fence. As she stood up on her tippy-toes and peered over the fence she saw the most incredible sight: Three little sirens in the bird bath singing their tiny little siren songs to whatever man happened to walk by.

“Abigail Starwart! Why are you snooping on the neighbor’s back yard?” her mother called to her from an open window. She didn’t call back. With a bit of a sigh and note of irritation to her voice, her mother called again. “I said Abi… Seaweed! What are you doing on that fence?!”

Seaweed let herself back down to the sidewalk and skipped back to her own yard. She didn’t want to irritate her mom, but she liked to be consistent. Abigail was the little girl with copper hair and freckles. She wasn’t that little girl anymore. She was Seaweed, the miniature adventurer with copper hair and thick streaks of green running through it. And the freckles? She’d set anyone straight on that. They were a secret star-map of constellations only seen in hidden places. She’d been tasked with guarding this special map.

She smiled up at her mother in the window. “Our neighbors have sirens. Noisy ones too. The birds seem pretty ticked off about it. It was their birdbath first.”

Her mother nodded her head and made a worried face and said something off hand about maybe the neighbors needed an exterminator. Once she was reassured her little cub was back within the yard she went back to her cooking.

“I’m not sure exterminators are humane… for anything really.” Seaweed offered to the yard. Soon another man was slowly approaching the neighbor’s fence with a dreamy look on his face.

On this day in 28 BC one of the earliest observations of a sunspot was seen by the Han dynasty astronomers in China. In 1869 the first Transcontinental Railroad is completed linking the east to the west in the United States. And in 1908 the very first Mother’s Day is observed in the US in Grafton, West Virginia. Sidney Blower knows very little about these dates and their recorded events, but she does know a thing or two about the sun. You see, on May 10th in 1913 Ms Blower catches the sun and successfully brews it into her new tea.

The idea came to Sidney one night as she sat with her mother and father on the porch of their country home. The sun was starting to set in the distance and it took with it the last of the light her aging parents could see by. No matter how many candles she lit or how she tried to lighten up their home for those dark hours, her parents would see nothing but shadows and this distressed her so. As she watched that sun she wondered to herself if she could capture just a little of it and gift it to her parents so they had a small light in that darkness.

Sidney’s first few attempts were haphazard events that she didn’t like to think about. A sunburn came from one and a sun itch (something she would tell people you had to experience because no words could properly describe the sensation) came from the other. She knew she was onto something though. She just needed to find the right medium to work with.

There came a moment, as Sidney gently led her parents to the dinner table, where her mother reminded her to bring in their sun-tea. The young woman walked back to the porch and picked up the large jar of amber colored water that had been left with a light weave of material filled with loose tea leafs to cure in the sun. Sidney looked at that beautiful thing of tea and knew she could somehow get the sun into that jar better than just using its warmth to brew her tea.